How to Care for the Dying

Contents (Read the contents sequentially or use the links below to jump to the desired section.)

Death is a special time…
If your mind is peaceful and virtuous at the end, it helps achieve a good rebirth
Create a peaceful, relaxed atmosphere
Do not argue, gossip, watch TV or discuss medical procedures within earshot of the dying person
Leave the room if you are upset of crying

Did you know…
The dying person can hear even though they may be unconscious
Pain relief can often be adjusted so that you retain a level of mental alertness
Except at the very end, close family and friends should be present
Allow the dying person’s spiritual friends and teachers to be present

When does the consciousness leave the body…
The death process continues after the heart stops beating
Disturb the body as little as possible for some time
The consciousness may not depart for three days or more
The recently dead person can hear you and understand your thoughts: wish them a happy next life

2 THE TEN POINTS OF CARE

Death is a special time according to the Buddha’s teachings. If your mind is peaceful and virtuous at the end, it helps achieve a good rebirth.

Approaching the Time of Death

After the Person Has Died 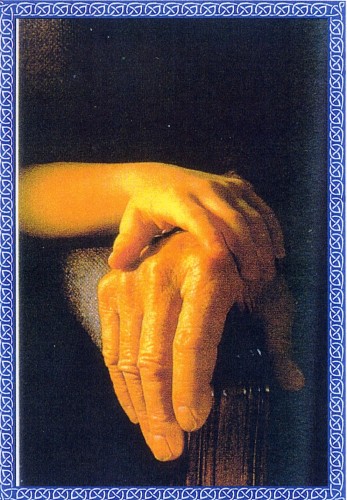 3 SIMPLE PRACTICE FOR THOSE WHO ARE SICK OR DYING

Visualize the person or people you wish to help in front of you. Reflect on their unhappiness, illness, dissatisfaction, restlessness, whatever mental or physical pain or suffering they are experiencing. Say to yourself that you really want to free them from their unhappiness and that is why you are going to do this practice.

Now imagine a ball of white light, containing all the goodness and kindness of this world, above the head of the sick person. If you believe in God or Buddha, or other transcendent deity, imagine they manifest in the radiant white light as the essence of unconditional love and compassion. That incandescent white light is their limitless compassionate love.

The pure white light enters the crown of the head of the person you are praying for, and passes down through their head, throat and heart, these three representing the body, speech and mind of your loved one. As it moves downwards, the white light-nectar purifies all the negativities built up over this and previous lives, all the karmic imprints and the disturbing thoughts such as attachment, anger, pride and jealousy. Even the kindest person has some dark corners in their mind, and you are determined to heal them completely. The white nectar passes down the body pushing ahead of it all negativities, imagined as black liquid, which exits through the lower openings, whereupon it dissolves and disappears.

Now imagine strongly that your loved one is clean and whole and at peace. A natural great peace and joy unknown to human beings. In this state of purity and love, your friend has the greatest chance of either overcoming their illness or dying peacefully. And a peaceful mind at death gives you the best chance of experiencing a happy next life.

It is good to think, too, that the white healing light now enters the bodies of all living beings who are suffering, not only your loved one. They are all purified, without exception, are blessed and have peaceful minds and joy in their hearts.

May all beings everywhere,
And especially my dear ……,
Plagued with sufferings of body and mind,
Obtain an ocean of happiness and joy,
By virtue of the kindness of myself and others.

4 THE NATURE OF THE MIND VERY NEAR TO DEATH

As people come very near death, I have observed that their mind and heart become less contained by their body and more atmospheric; it feels as if their mind is filling the entire room.Thus any strong thoughts or emotions we bring into the space surrounding the dying person have a powerful effect on her state of mind, for better or worse. Thus, it is clear that if we have inspired ourselves with meditation before entering a dying person’s room, or if we have invoked the presence of a buddha or Divine Person to whom we continue to pray, this can have a tremendously positive influence on the dying person’s state of mind.

5 THE CLAIRVOYANCE OF A PERSON NEAR DEATH

Jean, a close friend, called me in distress. She would be visiting her dying father-in-law soon, probably for the last time. Ed was comatose, so Jean wouldn’t be able to have a normal conversation with him. Her feelings were mixed – she knew it would be good if she could help him let go and die peacefully. Yet because of his alcoholism, he had brought considerable emotional suffering to his entire family, including his son, Jean’s husband. Over the twenty-five years she’d been part of the family, the family members were always distant from each other, uncommunicative and unsupportive.

Together we acknowledged that Jean’s anger was normal. We discussed a way for her to communicate her frustration to him, while at the same time releasing herself from it. I suggested that before communicating with Ed, she could sit and mediate quietly by his side, reflecting how much she would have liked to know the real Ed, not the alcoholic.

Together we found a way she could view the situation from a new perspective. We reflected how much Ed must have suffered in his own childhood to be re-creating the same anguish in his family now. And I proposed that Jean consider what it was going to be like for him to undergo the review of his entire life that is said to be part of the death experience. At that time he would be acutely aware of all the pain he had brought onto his loved ones; he would experience all of their suffering, together with his painful remorse.

As Jean reflected on Ed’s past , future, and present suffering, her anger melted into understanding and compassion. “Is there anything I can do to help him now?” she asked.

“When you’re with him” I suggested, “remember that although Ed appears comatose and unresponsive, the pure awareness of his true nature is still there, and this aspect of him can always hear you. Let him know that if he feels any regret for how he’s lived, he can dedicate his suffering and his death to his family, radiating his love and blessings to each person he cares about, with a strong prayer that they might be healed of any pain he’s caused them.”

When Jean began speaking to Ed she kept thinking: “This is crazy. He can’t possibly hear me. And if he was awake and knew what I was doing, he would kick me out of this room!” Still, when she first sat and meditated, sending her understanding and compassion to Ed, she sensed that it was gratefully received by the unconscious man. Jean went on to suggest that he use the moment of his death to heal his relationships and generate a strong, healing love toward his family. Then Jean said her last good-bye.

Later that evening, jean was driving home, and her husband was asleep in the passenger seat. Suddenly he woke with a start, saying, “This is so much easier now. The bitterness I felt earlier is simple gone.” Later they learned that this had been the moment of Ed’s death. Jean wondered if Ed had in fact dedicated his death to atone for his life. A different kind of confirmation came the next day. Jean witnessed something she had not seen in her years with the family. After the funeral, the family gathered together at their father’s home, and the conversation and sense of connection between them was loving and affectionate, very caring and genuine.

Fill in the form then click on the Pay Now button (you may need to scroll down to see it). In response, after a few seconds, you will be presented with the PayPal secure payment page where you can complete your payment. You can pay using your PayPal account (if you have one), or, if you don’t have one, you can use a credit card (use the “Pay by Credit Card” link).

Once you’ve paid, you will be presented with a successful payment page. Wait 10 seconds when you will automatically be returned to the Pure Land Centre website where you will request an email confirmation message to be sent to you.

Be careful when you type your email address as it is vital to the entire booking process.